If you are getting tired of your old tools that require electricity and cables all over the place, it might be time to consider upgrading to a set of cordless tools. Rather than picking up the odd one here and there, there are a number of advantages to buying a combo kit.

We are going to look at two combo tool kits from the leading brands in power tools, the DeWalt DCK590L2 vs DCK592L2. We will take a detailed look at each of the included tools and their performance. We will add a comparison chart so that you can clearly see their differences and some pros and cons of each.

After a number of different models, the comparison chart below will help to quickly review the two DeWalt cordless combo tool kits.

A quick glance at the DeWalt DCK590L2 and the DeWalt DCK592L2 and you may not spot a difference. They are both 5-in-1 combo tool kits with signature yellow and black tools and accessories.

The hammer drill included with the DeWalt DCK590L2 and the DeWalt DCK592L2 has a high-power and high-efficiency motor with 535 unit watts out. It has an excellent grip with the ½ inch ratcheting chuck with carbide inserts. There are three speeds, 0-600RPM, 1-1,250RPM and 0-2,000RPM.

DeWalt has designed an impact driver that is 43% faster than most others on the market with a no-load speed of up to 2,800RPM. The DeWalt DCK590L2 and the DeWalt DCK592L2 impact drill has a ¼ inch hex check and will also take 1-inch bit tips. It is a highly convenient impact driver fitting into small spaces at just 5.55 inches long. They also have 3 LED lights for when you are working in darker areas.

The LED lights that come with the DeWalt DCK590L2 and the DeWalt DCK592L2 provide bright white light and reducing shadows. The heads can pivot 120º and there are 11 different positions to choose from. The lights also have an integrated hanging hook. The average battery life is approximately 11 hours when used with the included battery.

There is a 3-year limited warranty with the DeWalt DCK590L2 and the DeWalt DCK592L2 combo tool kits. You can also take advantage of the 1-year free service contract and a 90-day money-back guarantee for added peace of mind. 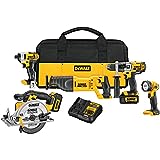 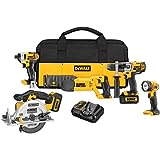 There are plenty of uses for a reciprocating saw, but they are particularly popular for flush cutting.

The reciprocating saw is the model number DCS381. It has a 1-inch stroke length with 0-3,000 SPM. There are 2 blade positions and a keyless lever for fast blade changing. The electric brake helps to prevent the blades from breaking.

This is the DCS380B with a 1 1/8-inch stroke length and a 4-position blade clamp. The rest of the features are the same.

The Winner Is- The DeWalt DCK592L2

Both of the circular saws take a 6 ½ inch carbide-tipped blade. One is more powerful.

The Winner Is- The DeWalt DCK592L2

Aside from the 5 tools, these combo kits have a few added extras.

It comes with 2 3.0Ah Lithium batteries that are compatible with all of the tools. There is also a fast battery charger, a belt hook, a side handle and a contractor bag. The product description implies there is an additional carbide-tipped blade.

The contents are the same but there is no mention of the carbide-tipped blade. The DCS391B does come with a blade for the circular saw.

The Winner Is A Tie

It was an easy decision today. The biggest problem with the DeWalt DCK592L2 is the carry bag, which is the same for the DeWalt DCK590L2. Aside from this, 3 out of the 5 tools are identical and the other 2 are the upgraded versions. While both of these combo tool kits are exceptional value for money, the DeWalt DCK592L2 has some better tools and you can save yourself a few dollars too, making it the winning toolset by far.