The first coffee of the day sets the tone. Those brews that follow are essential pick-me-ups throughout the day. With today’s technology, there is no excuse for not having a top-quality coffee machine at home.

We are going to compare the Bonavita BV1901TS vs BV1900TS. We will go over their design, power, brewing capabilities, and ease of use. Once we have gone over all of the specifications of the two coffee machines, we will include a side-by-side chart to review the features and some pros and cons of each.

The Bonavita BV1901TS and the Bonavita BV1900TS can let you create artisan-style coffee with the pre-infusion mode. This mode pauses the water as it flows over the coffee grounds so that there is time for it to reach the bottom and allows for degassing.

For the easiest of uses, the Bonavita BV1901TS and the Bonavita BV1900TS have just one button. All you have to do is add a filter to the basket, pour in your favorite coffee ground and add the correct amount of water to the water reservoir. When the carafe is in place, you can press one button to start brewing. 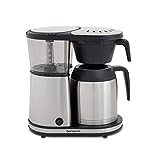 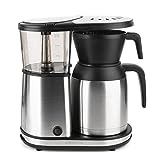 It’s a personal choice and, of course, it is nice if your coffee machine blends in with other appliances in your kitchen.

This coffee machine comes in chrome with a stainless-steel carafe.

The Winner Is- The Bonavita BV1900TS

There have been some minor complaints about the design of the coffee machines and filter baskets. This feature is down a personal choice too.

This filter basket is hanging from the showerhead.

In this case, the filter basket is attached to the carafe.

The Winner Is- A Tie

There is some product information missing here.

When the brew cycle has finished, you are warned with an audible beep.

There is no mention of an audible beep to advise you when the coffee machine has finished.

Read next – DeLonghi EC155 vs DeLonghi Bar32: Which Espresso and Cappuccino Machines are Better?

It’s not surprising that the price of the coffee machines is currently the same considering they are so similar. The warranty is different.

The coffee machine comes with a one-year warranty.

This is slightly better value for money because the warranty is 2 years.

The Winner Is- The Bonavita BV1900TS

There were some design flaws for both. Most specifically was the potential mess when you remove the carafe and when you pour the coffee. There are a few small changes that Bonavita could make to improve the overall machines. That being said, today’s winner is the Bonavita BV1900TS but only just. The extended warranty was the real bonus.